Behind the scenes with Red Disk in their new home

Our friends at Red Disk Studio, led by founder Traci Ackerman, recently moved into a beautiful new space they share with C2 Paint. We spent a lot of time last year getting to know Red Disk’s products as we built their ecommerce website, but we hadn’t seen the talented printmakers in action. Their open house was the perfect opportunity for an up-close look at the beautiful work Traci’s team is doing. Plus, the home they share with C2 Paint, the high-quality, environmentally-friendly paint Red Disk uses to make its wallpaper, is gorgeous. Red Disk prints almost a dozen patterns, half of which take their inspiration from Charles Burchfield’s designs. During our time in the warehouse, three printmakers were layering nine different C2 Paints. Almost unbelievably, the printmakers hand-silkscreen each color individually. The final product would be the beautiful Dogwood pattern in one of Burchfield’s historic palettes. What you don’t see in the finished product, but is immediately recognizable during the silkscreening process, is the camouflage-like pattern under the clusters of dogwood flowers. Traci explained that Burchfield spent time in the Army’s camouflage unit during World War I. This was the first war that involved aerial surveillance; for the first time, buildings and weapons needed to blend into their surroundings in addition to soldiers.

Burchfield’s focus on nature was well-suited for the task and he continued to use the pattern over time. It’s understandable that we didn’t see the iconic camouflage immediately. During his time at Camp Jackson, Burchfield wrote, “It was impossible for me to do straight camouflage. I had to have a poetic idea back of my designs.”

Modern Designs Made in Buffalo

The remainder of Red Disk’s wallpapers take inspiration from nature and some of Buffalo’s most iconic architecture. Cassandra Ort’s muted floral patterns are intricate and understated, perfect for literally any wall. We’re also obsessed with the Queen City Toile Damask, which layers detailed sketches of Hotel Henry, Shea’s, City Hall and other Queen City landmarks over a rich two-toned background. 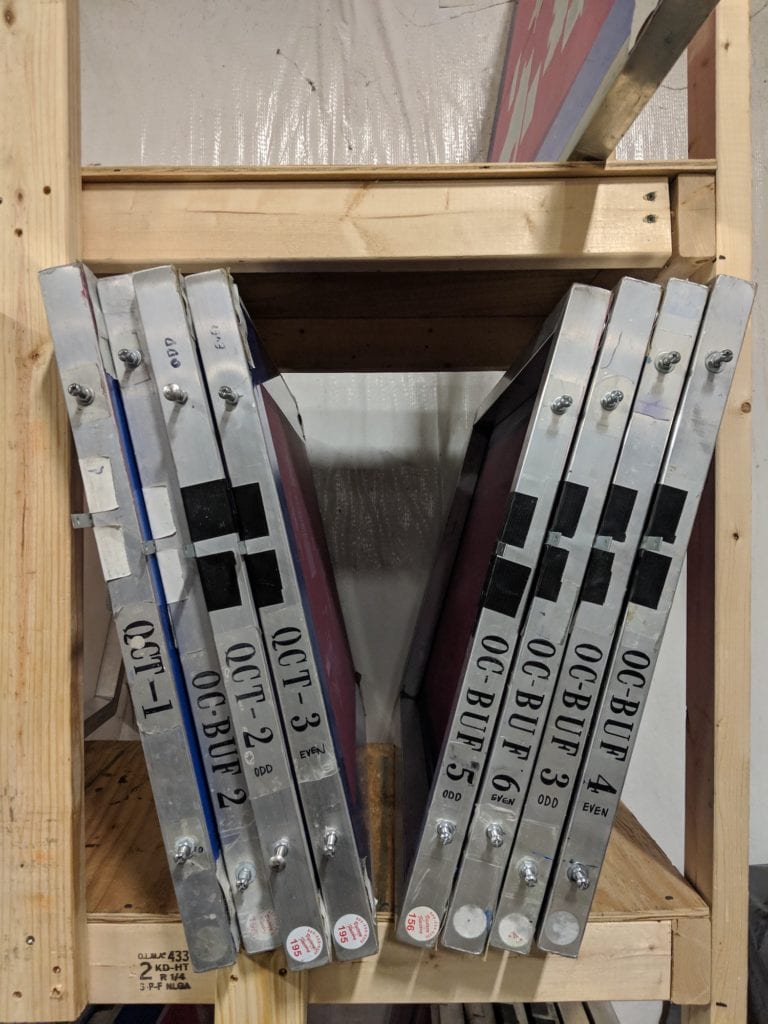 We watched these layered designs come to life in Red Disk and C2 Paint’s space. Three printmakers worked side by side to add each paint color, working on 30 feet of wallpaper at a time. Each design requires a multitude of screens. You can see each pattern’s set perfectly stacked along the walls of the warehouse, alongside dozens of cans of richly colored paints.

It was so much fun to see what happens behinds the scenes! Now to find a wall (or two) for the finished product to call home…